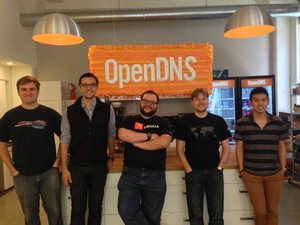 What is the A-Team?

The A-Team is the engineering team dedicated to customer success at OpenDNS. Together they support sales, support, and other engineering teams in the company. When something breaks, a customer has an issue, or a sales needs help – OpenDNS calls the A- Team!
Because its engineers can be interrupted at any time, the A-Team only takes projects that can be completed in under one week. With code dating back to 2006, they are masters of all OpenDNS production systems. Between the members of the team, they have extensive experience in a variety of languages and systems – from Perl to C# and from Hyper-V to Docker, they do it all!

A Day in the Life

The A-Team has a stand-up at 10AM every day for fifteen minutes.  Mr. Manager Justin gives an overview of what is happening in engineering and anything that may require immediate attention. Every member briefly describes what they did the day before and what they plan to do that day. Product Manager Dima lets the team about the latest news from the leadership as he sips a Red Bull. Finally, Mark from Support shares recent feedback from customers (like, “You rock!”).
Engineers on the A-Team typically work on mini-projects that require a couple days of effort. Small bugs in things like the Umbrella Dashboard are quickly squashed and inline documentation is often tweaked. One of the more substantial projects that took multiple members of the team was the deployment of a two-step verification system for account security. The idea started as a Hackathon project and was completed within 24 hours. Two-step verification requires a time-based token in addition to a password while logging in. This protects against stolen passwords because the customer logging in must have physical possession of their cell phone in addition to a memorized password. The A-Team took the hackathon project and improved its functionality and interfaces. The deployment of two-step verification last week marked one of many hackathon projects that reached customers because of follow-through from the A-Team.
Another major responsibility of the A-Team is maintaining the Umbrella Roaming Client.  This software for OSX and for Windows allow customers to extend Umbrella protection to any network their users join.  The development process for these clients is different than most projects in OpenDNS Engineering because the software is shipped rather than continuously updated. This means that it is more difficult to track errors and fix issues, so the testing process normally takes at least a week to ensure that there are no issues before customers receive changes.
The A-Team must always be ready to pause its projects when something requires an attention. When a major issues comes in – “blocker bugs” –  the team focuses only on that issue until it is fixed. Tools like Git and Nagios isolate changes that caused any issues.
A-Team members see the benefits of their work every day. Customers notice improvements in products, and maintaining close ties between the A-Team and Support means that the team is always working to make changes that customers desire most. At the end of the day, A-Team maintains the ease of deployment and simple management for security products that let OpenDNS customers safely connect to the Internet anywhere, anytime.

Justin “Mr. Manager” Swift – the A-Team’s pilot, he can navigate through any system with precision. Approaching his 3-year anniversary at OpenDNS, Justin is from Pittsburgh and he started at the company as a Windows software expert.
Doug Tabacco – As an OpenDNS Engineer for almost 5 years, Doug is the “muscle” of the A-Team because he built part of almost every system we’ve deployed. He can often be found organizing board game nights at the office.
Jason Jee – Jason joined the A-Team as an Engineer after graduating from UC Berkeley in 2012. He has become the wizard of the native OSX applications. When taking breaks, Jason often is playing ping-pong with his custom-made paddle.
Philip Thomas – Philip joined the A-Team as an Engineer after graduating from Washington University in St. Louis in 2013. He enjoys building data visualization systems for internal use. He runs the OpenLate meetup group at the San Francisco offices.
Dima Kumets – Product Manager Dima is a veteran product manager who has been at OpenDNS for over five years. He is also an expert with a lathe – he built the pepper grinders in the office. His dog Widget serves as the unofficial mascot of the team.
Mark “Slam Dunk” Dunkley – Mark manages the OpenDNS technical support team. He attends all A-Team meetings on behalf of support. Mark can be found hiking, mountain biking or snowboarding the north shore mountains in Vancouver.