Besides what DNS level data can tell us, examining the type of server software cybercriminals use also helps increase the accuracy of our algorithms. 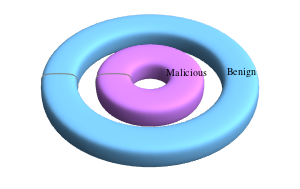 As of today, Apache remains the most popular web server software, though Nginx is clearly on the rise.

Though it’s not inconceivable, one can assume that websites using one of these CDNs are much less likely to be malicious.

However, 0.2% of malicious domains are using Cloudflare, and 0.1% of them were using Microsoft Azure.

The next thing we examined was the “X-Powered-By” header, which is also an identifier for the software running a web application or site.

Although the difference is not significant, Plesk is found more often on compromised websites than benign ones (5.67% vs 1.49%). But perhaps most important to note here is the presence of a “X-Powered-By” header which doesn’t indicate the presence of Plesk, ASP, or PHP.

Approximately half of the visited benign websites don’t serve any cookies. Compare that to 77.58% of malicious websites that don’t serve cookies.

Benign websites also tend to have a higher diversity of cookie names than malicious websites.

This can be partly explained by the fact that cybercriminals will often target applications that are easier to compromise, and hosting services that are malware-friendly often offer similar operating systems and software stacks.

Not all WordPress instances are sending cookies at the first visit.

A more reliable way to detect sites powered by WordPress that inspect cookies is to look for specific files. The one tested here is /wp-includes/wlwmanifest.xml.

According to this test, no less than 19.50% of malicious/compromised sites are running WordPress.

But WordPress is also omnipresent on sites that haven’t been compromised (yet): the file was also found on 13.92% of the benign web sites from our training set.

Looking at the “Last-Modified” header when requesting the home page is a good way to see whether a website is regularly updated.

Plotting the CDF of both classes of domains shows that sites whose home page hasn’t been recently updated have a higher likelihood to be malicious or compromised than sites containing more dynamic content.

The length of the content is also a useful feature. I examined HTML code for the home pages only of these sites.

In this training set, none of the benign examples served HTML code larger than 2 Mb on the home page, at least according to the Content-Length header. 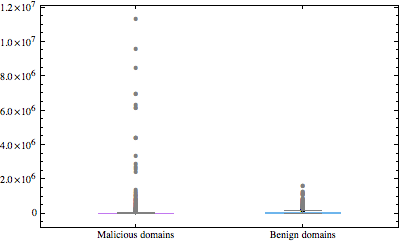 A few examples as of today:

More than 20% of web servers are also running an SSH server on the same IP address. This holds true both for benign and malicious servers.

The figures are quite different when it comes to FTP servers.

No less than 36.65% of web servers serving malicious content are running an FTP server. That’s nearly twice as much as servers for which we didn’t observe any malicious activity (18.57%).

In both cases, Pure-FTPd is the most popular FTP server software, with a 46.5% share, mainly due to it being shipped with Cpanel.

However, POP servers run simultaneously on 23.15% of malicious web sites.

The distribution of the POP server software is similar in both benign and malicious cases, with Dovecot being by far the most popular option.

As expected, SMTP servers also tend to be more frequently found on web servers hosting malicious content than on benign ones: 25.03% vs 17.49%.

Using this data for classification

After analysis, we then used this data to extract simple binary features:

A decision tree trained with these features on 2/3 of our examples leads to the following ROC curve: 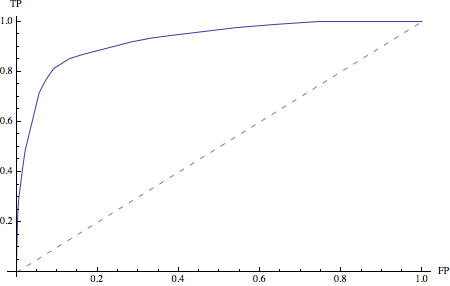 This classifier is simple and extremely fast, but it clearly doesn’t perform well enough on its own for our security needs. Furthermore, collecting test data is a network-intensive operation.

However, we have many models currently tagging domain names as suspicious or not according to different algorithms.

Some of these domains have a very high precision and are added to the list we are blocking after a quick manual review. For instance, newly registered domains acting as fast-flux fall into this category.

Output of other models need extra votes before we are confident enough to blocklist them and thereby protect our customers. And this new classifier is going to play a significant role in this regard.