The news agencies and antivirus companies claiming victory over the Beebone botnet are only half right. The difficult effort of stopping the botnet is complete. “Operation Source,” as it’s become known, was a mark of success for collaboration between international law enforcement agencies and private security firms like Intel, Kaspersky, and Shadowserver. But, as we’ve seen before with cases like Kelihos, botnets can resurface after a dormant period.
While the sinkhole operation was a great success, according to OpenDNS security researcher Mark Nunnikhoven, it is only the first step to ensuring security for those affected by the botnet. The next–and perhaps more crucial–steps are to shutdown the servers involved and clean the infected endpoints.
Beebone–or AAEH as it’s also called–reportedly infected more than 12,000 systems across a number of countries worldwide, though the full scope of infections may not be entirely known. Beebone itself is not a destructive virus, however. It is the delivery mechanism for installing malware like keyloggers, banking trojans, and ransomware onto compromised machines.
The interagency sinkhole essentially chops the botnet’s capability at its knees. However, unless they have been thoroughly cleaned, the endpoints compromised by Beebone are still very much infected. The sinkhole merely means outbound traffic intended for what were formerly command and control (C&C) IPs will now get dropped. This result is positive. It means those infected machines will no longer receive instructions from a malicious server–for now.
“Due to the takedown, these devices are now receiving a benign response, but they still need to be disinfected,” Nunnikhoven wrote in a blog post. “The US-Cert has published links to cleanup tools for various systems that can help with these efforts.” 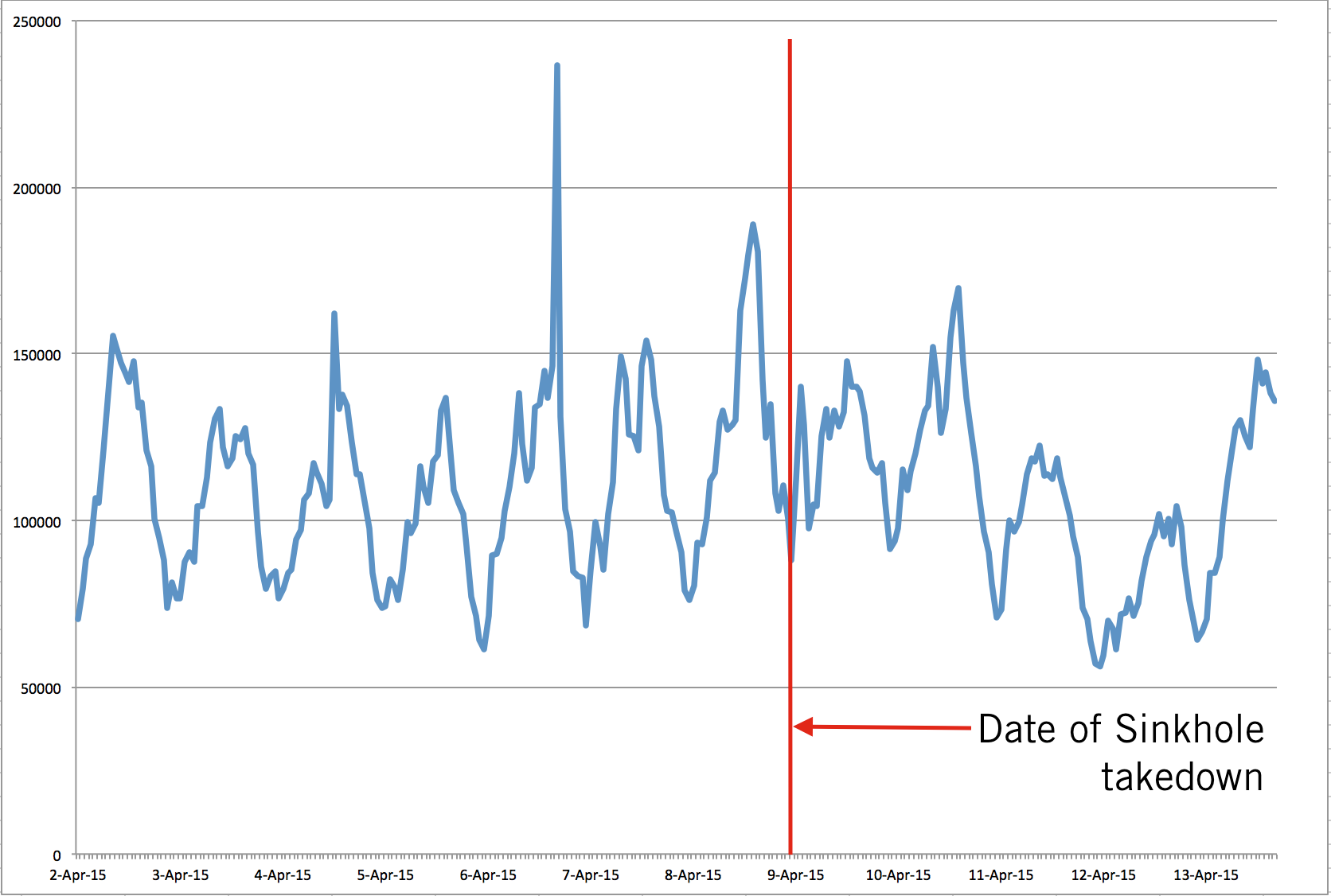 Analysis from OpenDNS shows traffic requests to these formerly malicious domains are still at very high levels. “What we’re seeing through our global viewpoint of DNS traffic is requests to the various botnet domains have not dropped significantly since the takedown on April 9th,” Nunnikhoven said. “The continued significant traffic to these domains suggests that cleanup efforts have not been effective yet.”
Unless infected systems are cleaned, hackers responsible for Beebone can essentially pick up where they left off if they included an IP update mechanism with the malware they used. But the cleanup can be incredibly tricky. The collaborative effort to sinkhole such a massive interconnected system of compromised servers is a huge undertaking. But the effort required to individually clean all the machines infected by the Beebone malware is even larger.
Dhia Mahjoub, senior security researcher at OpenDNS, has spent a great amount of time researching botnets like Kelihos and Zbot, which have similar characteristics to Beebone. And he’s fully aware of the challenges involved with stopping them. “Sinkholes are good for telemetry, which will measure the extent of the threat,” he said. “Step two is for law enforcement to actually take down the involved servers, and to clean the endpoint machines.”
But the last part is the most difficult, as it involves finding all the infected machines and somehow communicating to their users that they have been infected and need cleaning.
“Cleanup is incredibly difficult because the burden lies on the individuals using infected machines, or their ISPs,” Mahjoub said. “It’s a huge effort and very expensive. But without it, botnets can potentially pick up where they left off.”