In Part 1 of this series, Elasticsearch proved that it could be configured to consume log data by using Index Templates and an time schema based on time frames. In order to move forwards with Elasticsearch it also needs to be easily scalable while maintaining high availability. This post will first explore three different node roles and how to use them scale an Elasticsearch cluster while maintaining a balanced workload. Moving forwards, this post will talk about a few different failure cases and how to protect a cluster from them.

Scaling horizontally with Elasticsearch is as straightforward as it gets. Adding more nodes to an Elasticsearch cluster is as simple as firing up a new Elasticsearch instance with the cluster name in the Elasticsearch config(elasticsearch.yml) file to match the rest of the cluster. When the new node comes online it will be automatically discovered by the cluster and get to work right away. As a cluster grows, three different types of nodes can to be added. Part of maintaining a stable cluster is making sure that there are the right number of nodes performing each role.
Data Nodes
Data nodes are the workhorses of the cluster. They are responsible for indexing documents and performing searches as well as other index operations. Adding data nodes is the best way to scale up an Elasticsearch cluster if indexing and/or search performance needs to be improved.
A data node has the following configurations:

These settings prevent the node from storing data thus enabling it to focus solely on its job as a master node.
Load Balancer Node
Additionally, if an Elasticsearch cluster is receiving a high volume of index or search requests, adding some load balancing nodes can take some of the stress off the data nodes in the cluster. A load balancer node is not a master node and it also does not store any data. Its sole responsibility is to handle all HTTP communication.
A load balance node has the following configurations:

Load balancer nodes take pressure off of data nodes by routing search and index requests to the relevant nodes. This prevent requests from being bounced between data and/or master nodes. Additionally load balancer nodes perform all of the “Scatter and Gather” operations of a search request, allowing data nodes to focus on their primary functions.

Sending this request will simply update the template with the new number of shards, but will only be applied to new indices. Once an index is created, the number of primary shards cannot be changed. We can however, balance older indices by increasing the number of replicas per shard using the following request:

For example the graphic below shows a two-data node cluster with a balanced index: 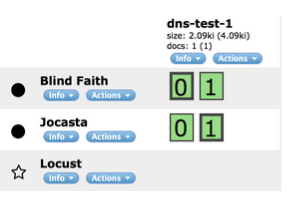 With two primary shards per index, each with one replica, the workload will be evenly balanced between the data nodes. Then, adding a new node, the shards will be rebalanced automatically: 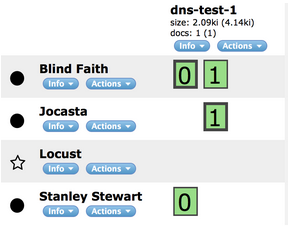 With three data nodes but only two primary shards per index, the workload is no longer evenly balanced. “Blind Faith” could receive double the traffic of “Jocasta” or “Stanley Stewart”. Now update the template, setting “number_of_shards” to three, up from two, so new indices will be balanced evenly: 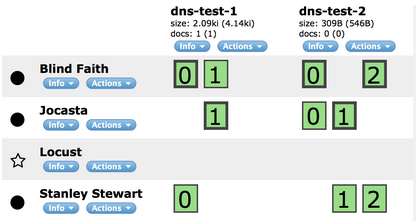 Finally, increase the number of replicas of the old index to rebalance it: 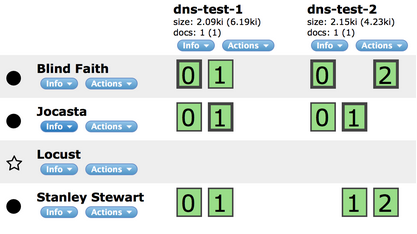 This last step may not always be necessary as it will significantly increase the storage requirement of the index, especially if rebalancing the index requires adding more than one additional replica.

The most common case is the failure of a data node. In the case of a data node failure, Elasticsearch will automatically rebalance each index by creating a new copy of each failed shard using its replicas. In the time between when a node fails and the failed shards are replicated, the cluster will enter the “yellow” cluster state. This means data loss is possible if another node fails during this window. Furthermore, no node can store more than one replica of the same shard, so it is possible extra replicas will not be reassigned after a failure. They will simply wait until the failed node comes back online. For example:

Cluster Health is now “Yellow” due to shards ‘0’ and ‘2’ in “dns-test-2” being replicated. Once they are finished, there will be unassigned shards in “dns-test-1” still but every shard will have a stable replica:

Cluster Health is still “Yellow” due to unassigned shards in “dns-test-1,” but the cluster is stable as every shard has at least 1 replica. Now bring the node back online and the cluster will return to normal:

Master Node Failure
Another case is the failure of a master node. In this case, having a backup master node is essential since otherwise a data node will be elected as the master. A data node might not be able to handle the added responsibility of maintaining the cluster state which could result in all kinds of badness. Otherwise, if a master node fails a backup will simply be elected master and the cluster state should be maintained. For example: 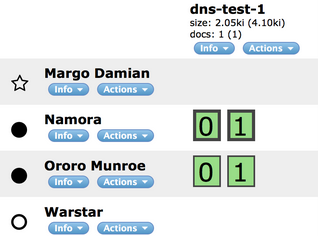 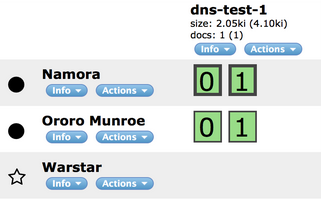 Read more about the Brain Split problem here.
Load Balancer Node Failure
Unfortunately, failure of a load balancer node cannot be automatically dealt with by Elasticsearch. Any requests sent to the failed node will return an error message that must be handled on the client side.
If any node that is receiving index or search requests fails, the following exception will be thrown:

Having multiple load balancer nodes should allow the client to handle this exception and redirect the request to an available node.

In this second part of our series, Elasticsearch has shown that it can be scaled and balanced with relative ease. Additionally, Elasticsearch can maintain a highly available cluster by assigning specific roles to each nodes and having available backups. In the next post in our series on Elasticsearch we will look into optimizing searching and sorting for log data.
Continue to: Elasticsearch: You Know, For Logs [Part 3].