For our latest OpenDNS hackathon, I decided it would be a fun exercise to use an individually addressable digital LED strip to create a build light for our Jenkins instance. We work in a continuous development environment, and the light gives a quick heads-up display to see if it’s safe to merge. Plus, LEDs are just plain fun! 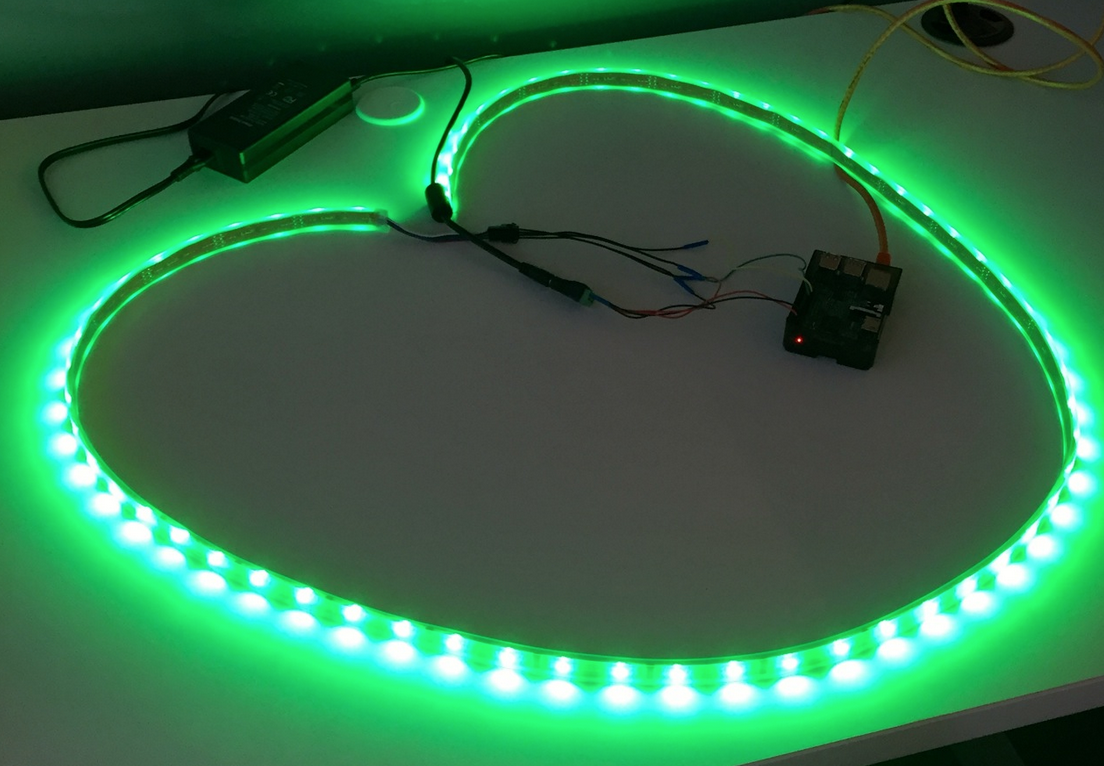 I followed this Adafruit article but used a Raspberry Pi 2 instead of Pi 1. The Pi 2 has more available pins, but the connecting pins will be the same. For power, I opted for a 5V/10Amp switching PSU, which provides more than double what my two-meter strip needed.

If you have some basic knowledge of Python, Linux, and soldering you should have no problem completing this in a few hours. If you’re anything like me, you’ll spend the majority of your time playing with different lighting patterns.

*You can get away with not soldering if you buy appropriate connectors to hold wires in the place. I also tried the ribbon cable used in the Adafruit tutorial and it provided a very tight connection.

Let’s wire it up! 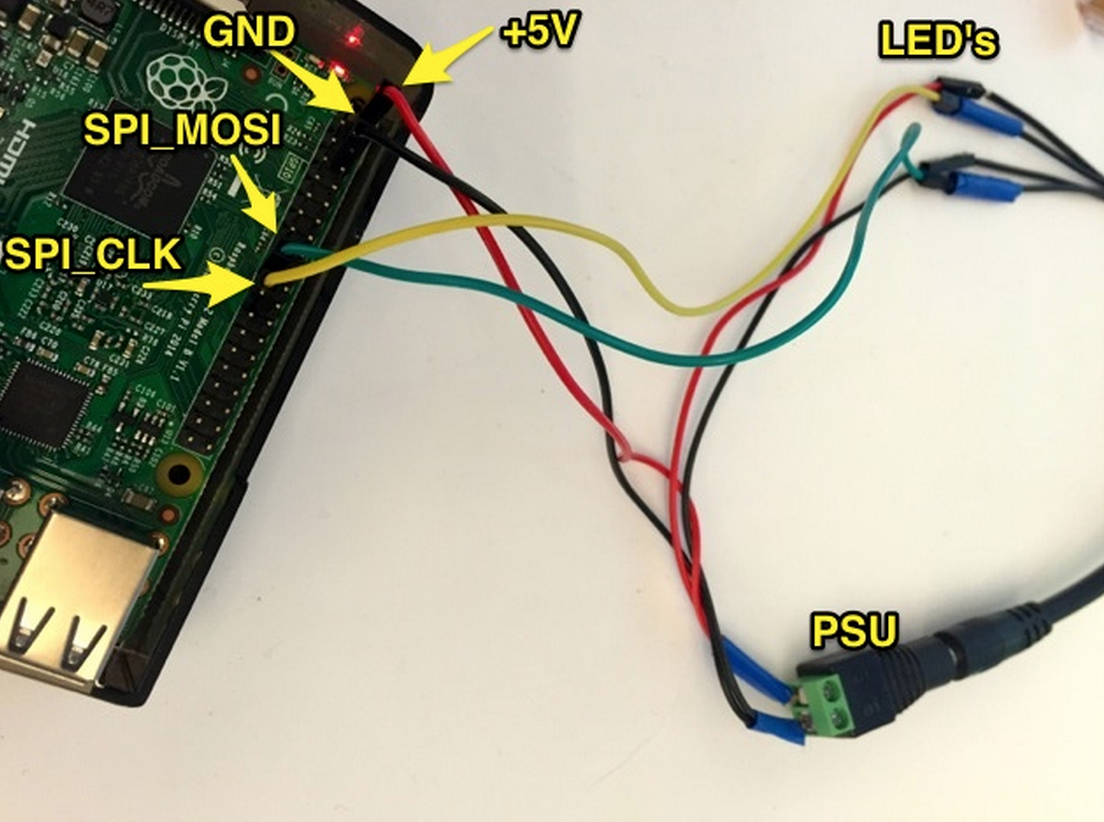 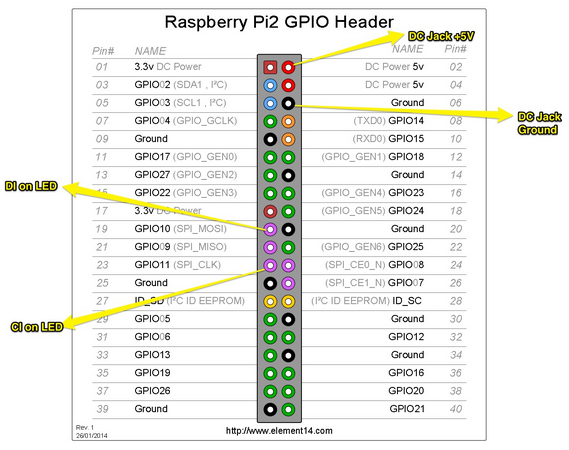 Note: Do not attempt to power the LEDs off a micro USB cable connected to the Pi.

Be aware of polarity

I lucked out and Adafruit shipped my LEDs with a female JST 4-pin inline cable attached to the inputs of the LEDs. But Adafruit’s website says this is not always the case, and you might find your JST cable connected to the LED outputs! So be aware of which end you’re connecting to on the LED strip. If you look closely at your LED solder points you can see DI and CI for input, while DO and CO are your outputs respectively.

Once everything is connected it’s time to plug in the PSU.

Initially, when I connected my LED strip there were no lights or random lights turning on until I ran my python script instructing the LEDs. Whew! But this could also be a sign that you’re not providing enough amperage to your LEDs. Adafruit has some troubleshooting tips to read over. If you’re using more than enough power then lets ignore the random LEDs and let’s move on.

Rasberry Pi’s own site has very good instructions on how to do the following:

Here’s some of the software dependencies and updates that helped me. I used python 2.7.3 for this project, which was preinstalled on the Pi. I recommend using virtualenv to install your python dependencies. It’s a good habit to get into and keeps things tidy. You need to first ssh pi@ipaddress and install these from the command line of the Pi. Most of these will require sudo.

Reboot once everything is installed

Bibliopixel should’ve included multiple drivers to choose from. We’re using the LPD8806. Once it’s installed (and SPI is enabled) you should see the device in your dev directory on your Pi:

Now for the fun part, playing with LEDs!

I wrote a simple python script that utilizes threads and a queue. Using a queue is one way to communicate between threads with the added bonus that it’s thread safe. The change of color can be thought of as an event and your event pool as a handler. When an event is emitted, the appropriate candidate responds with it’s particular color or animation.

The color changes I’m using in my script are very simplistic on/off color changes but Bibliopixel provides some very fun pre-written animations that you might try modifying, for example:

Clone the latest copy of the jenkins status light script:

The colors I selected might not be what you want, but you can easily swap out predefined colors in the global section at the top of my script.

Once things are working then we should try wrapping our script with Supervisor. This provides us with monitoring and helps keep the script running. If our lighting script exits or crashes for any reason, Supervisor will restart it. As an added bonus, when you plugin the Raspberry Pi, the script will automatically run and the lights come right up!
As the root user, run the following command to install the Supervisor package:

Once you’ve saved that file then as the root user you can inform Supervisor of our new file:

Then update with those changes:

To control Supervisor you can use the following commands:

To monitor stdout of our py file output:

There’s also an interactive mode that is worth reading about.

The Raspberry Pi is a full fledged computer and it’s only as secure as you make it. Here’s a list of some things to do to increase the security of your device:

Note that some things such as “changing the ssh port” while not bad, will only get you so far. “Security through obscurity” won’t do much but slow down a determined hacker.

Since this was 24-hour hackathon project I’m sure there are plenty of code improvements to be made. Please feel free to fork and submit changes and improvements! We’d love to see your own projects and what you did with this! Happy hacking!