A recent New York Times article reported that,“While Comment Crew has drained terabytes of data from companies like Coca-Cola, increasingly its focus is on companies involved in the critical infrastructure of the United States — its electrical power grid, gas lines and waterworks. According to the security researchers, one target was a company with remote access to more than 60 percent of oil and gas pipelines in North America. The unit was also among those that attacked the computer security firm RSA, whose computer codes protect confidential corporate and government databases.”

Much has been disclosed about the recent attacks, but our team wanted to investigate the traces of APT1 available from our massive data sets in order to get a better idea of how close this threat is to our customers. We also wanted to generalize the observed behavior of these traces into good heuristics for future discoveries and to spot anomalies or potentially-hidden links that could shed light on APT1’s infection vectors.

We uncovered some fascinating results through our research. Of the 2,046 APT1 command and control (C&C) domains we looked at, 98% are stealth operators, showing only 0-100 daily requests. However, a few domains receive tens of thousands of requests in a single day. The traffic volume is consistent across all hours, indicating script behavior. 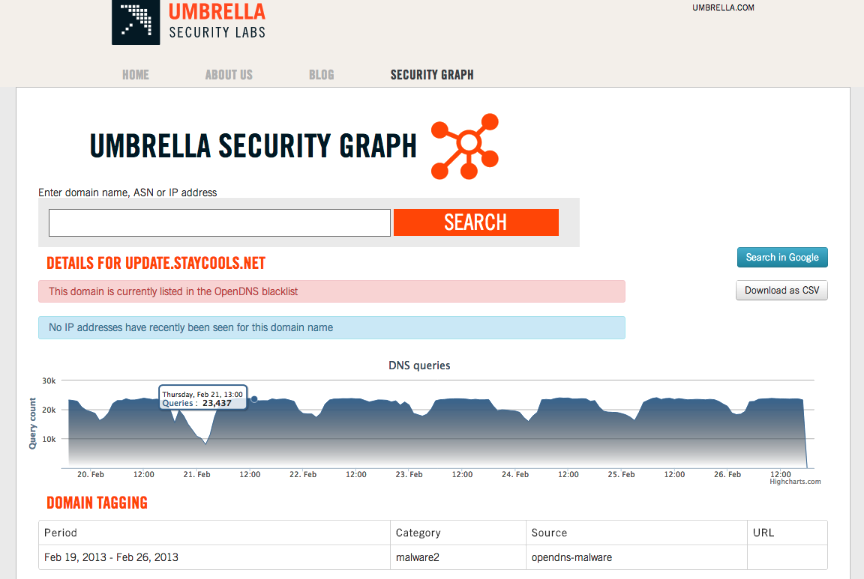 Among all the IP addresses contacting these APT1 C2 domains, we spotted only two Chinese IP addresses, which is especially interesting because the attack has been widely-claimed to be China state-sponsored. However, considering the strong Internet censorship in China, it isn’t unlikely that a particular organization or ethnic group could be hacked by their own government. 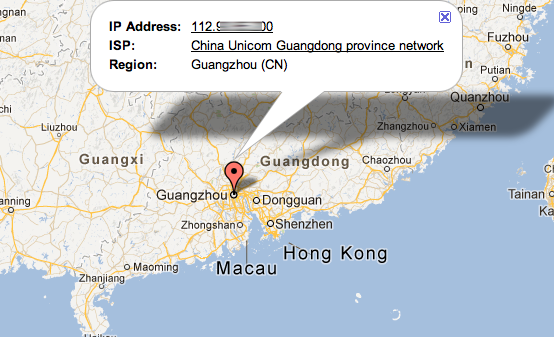 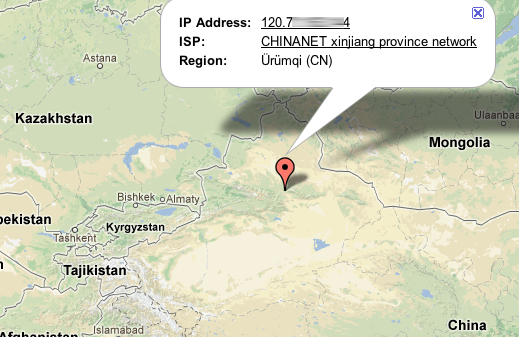 [one victim IP is mapped to Korea Telecom]

Although we know that spear phishing was the primary infection vector, it is not yet clear or disclosed how many of the other infections transpired. The C2 names were clearly carefully-composed to easily confuse people with trusted news or service sites, such as “nytimesnews.net”, “firefoxupdata.com”. As we mentioned earlier, we used the Umbrella Security Graph to apply co-occurring pattern discovery. Co-occurrence measures the frequency of each pair of domains being requested by the same person across the population of all clients in a small time window. Most importantly, co-occurrence pattern discovery allows us to surface undiscovered connections between threats.

The list of domains below have exclusively co-occurred with one of the APT1 C&C domains within a small, pre-set time window. Nine of them are known malicious sites, and include drive-by downloads, spam, Fake AV and phishing threats. Looking closely at these threats, we recognize ff-demo.blogdns.org, a domain associated with the FinFisher/FinSpy spying tool that is reported to be used by certain governments to spy on domestic activists. We also recognize omughaltef.sendsmtp.com, a domain tied to the UrlZone banking trojan.

As of the time of our reporting, most of the APT1 domains have been suspended or sink-holed. However, there are still more than a hundred Active IPs that a larger sample of APT1 domains resolve to (shown below).