WHAT THESE COUNTRIES DID WITH THEIR TLD’S WILL SHOCK YOU!!!! : Part 1

TLD’s are interesting. Chances are, you’ve used one every time you’ve gone online or sent an email. For those that are unaware of what I’m referring to, TLD stands for Top Level Domain (or TOTALLY LEGIT DONUT! LOL anyone?). It’s basically the 2-5 letters after “the dot” at the end of a URL. So for instance in opendns.com, the ‘.com’ is the TLD. You’re probably familiar with most TLD’s without even thinking about it.

These donuts are lookin’ totally legit.

When DNS was first unleashed back in 1983, it made the internet usable. It gave us the means to be able to use domain names like ‘opendns.com’ instead of having to type in something like 208.67.222.222 just to visit a site. These early domain names, along with their TLD’s, were initially created with specific uses in mind, some of which are still used for their initial purposes. The .com TLD in particular was initially intended for commercial organizations only. However around the mid 1990s, ICANN lifted all restrictions for registration of the .com TLD. You can now assign .com domains to just about anything under the sun.

Country Code Top Level Domains, or ccTLD’s, run the same gamut as their TLD counterparts. They are normally two characters long (for example .de or .co) and are also generally used or reserved for a country, sovereign state, or dependent territory. The IANA, or Internet Assigned Numbers Authority, is responsible for determining an appropriate trustee for each ccTLD, and the idea is that the root server for the geographically labeled TLD should be located and governed by someone from the country that the TLD is said to represent (for example, .mx would have a root server in Mexico and would be governed by someone that lives there). However, with the .com domain availability getting slimmer by the minute, and also with many brands using clever ways to market themselves via “domain hacking”, many countries have turned to more commercial uses for their countries TLD (thus technically classifying them as a GccTLD or Generic Country Code Top Level Domain). And let me warn you, this rabbit hole goes pretty deep, so I’ll just mention a few of the more interesting instances that stick out.

.LY – ‘ly’ are two letters that show up at the end of many words in the english language. It is also the TLD that was initially used by bitly, one of the first commercial URL shorteners to break on to the scene. However, the .ly TLD is meant to represent the country of Libya.

.AM / .FM – the .am TLD is to represent Armenia, and the FM to represent the Federated States of Micronesia, however this TLD tends to be popular among radio stations. Not exactly “domain hacking” but still relevant.

.IO – An acronym that commonly stands for Input/Output, .IO was adopted by many startup companies looking to add a bit of cleverness to their URL branding. However, this TLD is meant to represent the British Indian Ocean Territory.

.ME – Used for many personal websites, this one is designated for Montenegro.

.DJ – One of my personal favorites, this one has been adopted by DJ’s across the country hoping to add a little flavor to their personal URL branding. The country? You guessed it. DJIBOUTI! 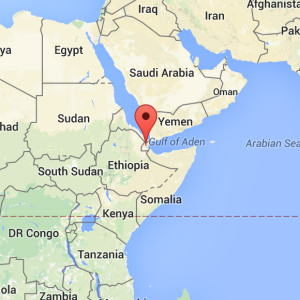 Djibouti is here. Some DJ’s might live there too, but I don’t know for sure.

.LV – Marketed as the unofficial TLD for the popular city of Las Vegas, however was initially created to represent the Republic of Latvia.

I’ll stop there. As time marches along, more and more ccTLD’s are being adopted for more than just location purposes. It’s probably important to mention that the ccTLD’s were initially meant to promote country targeting. For instance, it would be assumed that a domain ending in .tv would be the business of a company in Tuvalu, a small cluster of islands in the South Pacific. However, with many of the relevant branding for .com domains being bought up and/or too expensive to purchase, many brands have turned to ccTLD’s, and in some cases gTLD’s, as an alternative.

The final category of TLD’s that we’ll be talking about in this segment is the gTLD, or Generic Top Level Domain (gluten-free totally legit donut). Sometimes referred to as themed TLD’s, these are pretty much 100% cosmetic and don’t seem to have much of a character limit. A gTLD is essentially any TLD that is available for unrestricted use. By technicality, there are a few that have been around for a long time that are considered to be gTLD’s. The .com TLD, for instance is, considered a gTLD as it was once meant to be utilized for commercial entities only (however, as previously mentioned, .com domains are now available to use for whatever you wish). In early 2012, ICANN decided to open the door to allow a plethora of new gTLDs to exist, with hopes to increase competition and choice in the domain name space. These new gTLD’s are no longer confined to the 3-character limit, and are often full words. So TLD’s such as .music, .casino and .blackfriday can now be registered and used, and the representative that is granted ownership of a TLD is allowed to enforce whatever restrictions they choose. This also opens the door for brand specific TLD’s, so things like .cisco, .bently or .google are now available to the TLD’s corresponding companies.

A few interesting facts about these new gTLD’s:

-The longest active gTLD is 18 characters long and is .northwesternmutual

Stay tuned for Part 2 of this blog for the main course, where we dig into our own data to pull stats and info about these fairly new and incredibly interesting gTLD’s!