Survey results from a recent OpenDNS-commissioned study—titled “Securing Direct-To-Internet Branch Offices: Cloud-Based Security Offers More Flexibility And Control”—by Forrester Consulting show that IT decision makers are looking for flexibility, cost, and performance advantages in choosing direct-to-Internet connections. But in addition to these previously-discussed IT networking insights, the study shines a light into the mindset of decision-makers who are tackling the security challenges posed by an increasingly mobile and distributed workforce.

Key to understanding the report’s findings is first understanding the gradually decreasing emphasis on the traditional hub-and-spoke wide area network (WAN) model. Mobile work is on the rise and security professionals know that network protection needs to be extended to the branch offices at the far corners of their organization. The study’s authors say that not only is the traditional hub-and-spoke networking approach no longer the preferred method for connecting a distributed workforce, but cost and performance issues will actually prevent future IT decision-makers from switching back to a hub-and-spoke topology. 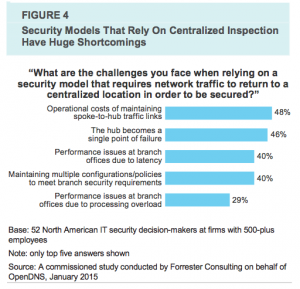 Additionally, survey results now show that hub-and-spoke networks can actually create security roadblocks for many organizations. According to the Forrester survey, IT security decision-makers have identified a number of shortcomings in traditional hub-and-spoke networks, ranging from the aforementioned IT costs and increased policy complexity to performance issues due to latency.

While economic concerns are pushing companies toward more open branch office connections, providing security for these connections is an increasingly worrisome issue. According to the report’s authors, a historic number of high-profile data breaches in 2014 is causing companies to provide heavier investment in network security. They also state that companies are increasingly looking for approaches that make sure these direct connections don’t become easy footholds for attackers to gain access to a company’s network.

Survey data show that when it comes to security service adoption, IT professionals highly value speed of deployment, improved protection and round-the-clock coverage. Interestingly, the pricing model of as-a-service offerings and reduced capital expenditures are also ranked as important reasons for adoption SaaS offerings, indicating that cost is not only driving organizations with multiple branches away from hub-and-spoke networks, but into the cloud. The report’s authors also highlighted that security professionals are looking for technologies that “free them from hardware appliances, provide unified visibility, and take advantage of collective threat intelligence.” 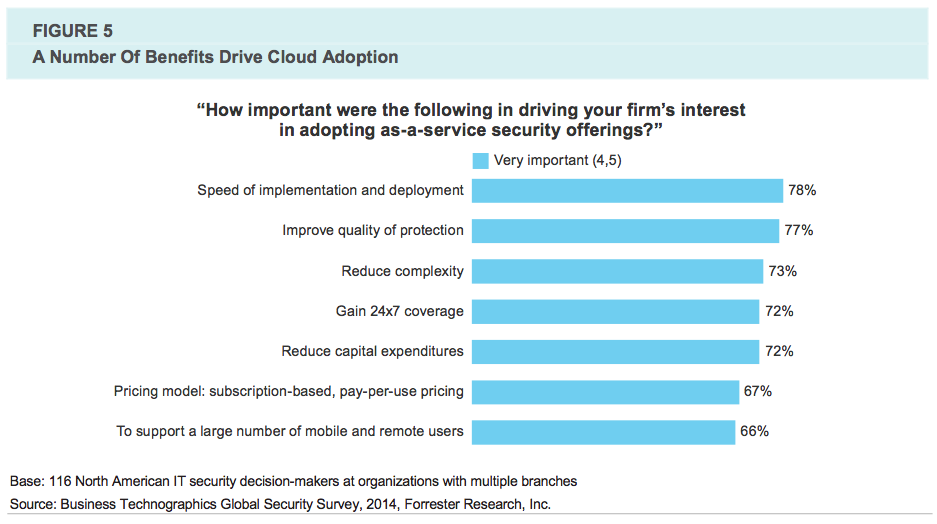 For more information, and to read the full study, check out the full Forrester Technology Adoption Profile on the OpenDNS website.