Announcing the 2010 SysAdmin of the Year Awards 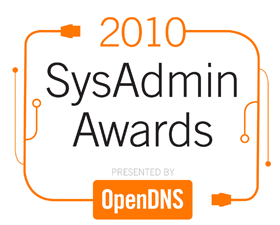 Here at OpenDNS we’re all about the SysAdmins. While we’ve made it our mission to ease their lives, we also look for ways to thank them for keeping our networks up and running. One way we do that is by celebrating System Administrator Appreciation Month (July) with all of the related events we put on, including the party (details coming soon – it’s gonna be good this year!).

To kick things off early, today I’m excited to announce the 2010 System Administrator of the Year Awards, the largest contest of its kind and the best way to give a SysAdmin that you respect the cred they deserve. There will be one winner selected in each category by a panel of esteemed judges, including OpenDNS System Administration team members George Patterson and Mack Nagashima, and CEO (and occasional SysAdmin himself) David Ulevitch. Winners in each category will receive a prize of $50, and from all entries the judging committee will choose one winner that stands out among the rest as the official OpenDNS SysAdmin of the Year. We’re still working on details for the Grand Prize, but we aim to please.

The deadline for entries is midnight June 29. Winners will be announced shortly thereafter.

Without further ado, the categories:

A hurricane, a fire, an earthquake. A datacenter meltdown. Something that would have caused business operations to shut down completely, if it weren’t for this SysAdmin. Like a knight in shining armor, he or she managed to keep the network up and running. Your submission should include details about the disaster and how the SysAdmin handled it.

SysAdmins take pride in documentation and organization of cabling, wiring and racks. Wow the judges in this category with photo evidence showing that your SysAdmin is the neatest and most organized of them all.

This SysAdmin works wonders with a seriously tight budget. Tell us about the SysAdmin with the craziest buildout done on the cheap. We need details for this submission – tell the judges specs, total cost and what kind of awesomeness it powers.

Even with a team of talented operators, SysAdmin’ing is not easy work. But when flying solo it can be downright heroic. Regale us with a (true) story of the heroic SysAdmin who saved the world (or did something awesome) to save the day (or company) all by his or herself.

Some jobs are too challenging to comprehend, but not for the SysAdmin who wins our Large-Scale Deployment Award. Tell us the story of a SysAdmin who has managed a massive amount of infrastructure from their diety-like fingertips with finesse and elegance. Tell us how big the deployment was, when it was built and what some of the impressive metrics it offered were (pageviews, megahertz, memory, rendering, etc.).

Often, the most successful SysAdmins are the ones who work well with others. Large websites like Flickr attribute much of their success to the close collaboration between engineering and operations. Share a success story of your own where the SysAdmin’s collaboration played a key role in a successful engineering project. Tell us when this happened, who was involved, and how you know it was successful.

How to nominate a SysAdmin for an award: To submit yourself or a fellow SysAdmin, just email awards at opendns dot com with the award category in the subject line. Follow the instructions for the category in your submission.

Good luck to all! We’re rooting for you!