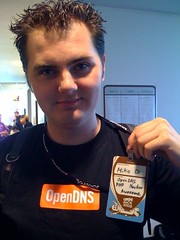 MikeD (check out his badge)

Richard, MikeD and I went down to Yahoo this past Friday to participate in their second Hack Day event. Yahoo opens their campus to outside developers on Hack Day for a 36-hour stretch of coding, technical talks, music and fun. It was an amazing event attended by hundreds of developers that banded together to produce 47 hacks by Saturday afternoon. There was even a live performance by Girl Talk on Friday night. I didn’t stay overnight to hack like MikeD and Richard did (more on their awesome hacks in a moment), but I left Friday evening feeling more excited about what Yahoo is doing than I’ve ever felt before.

As many of you know, we work closely with Yahoo to deliver the best search results and ads possible on the OpenDNS Guide. As a company focused on helping people navigate the Internet, we felt strongly early on that it would make no sense for us to build a search service ourselves. Partnering with Yahoo for our search and advertising has been a great move. The quality of the Yahoo Developer Network Search API has has continued to impress and now we’re excited to get involved with the next iteration: Yahoo Search BOSS. 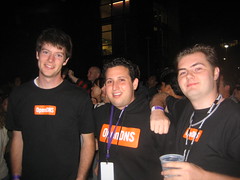 BOSS is the future of Yahoo’s search API, allowing developers to manipulate the results and Yahoo’s index directly. MikeD converted our existing Guide from a PHP application that proxied results from YDN Search to a static Guide that speaks to BOSS directly from your browser. By the early morning hours and thanks in part to the YUI JavaScript library, MikeD had built a prototype of our new Guide.

MikeD was able to get Richard to help with the HTML and CSS before presenting his hack to all the judges and developers. Their hard work paid off and MikeD came away with three awards from the competition! He won the Yahoo BOSS award, third place from the YUI group and the overall Bleeding Purple Award for the hack that screamed “Yahoo!” the loudest (figuratively). For those who don’t know, purple is Yahoo’s color of choice. Richard also made a sweet hack creating a geotagging extension to the Flickr Uploadr (which he also wrote) called Dopploadr that uses data from Dopplr to automatically geotag your photos that are uploaded via the Flickr Uploadr.

I’m proud of what these guys accomplished and I’m excited about what Yahoo is doing. We’ll be working on rolling out MikeD’s new code over the coming weeks as we get various issues sorted out and the “OK” from Yahoo to switch all our traffic over. Hack Day was a fantastic event and I’m glad I was able to be there. I should also mention that if you want to join our team, we’re currently hiring great engineers. 🙂